Featured at The Sweetest Memory!

Hey, check it out!

We're the featured Sweet Shop over on The Sweetest Memory today! 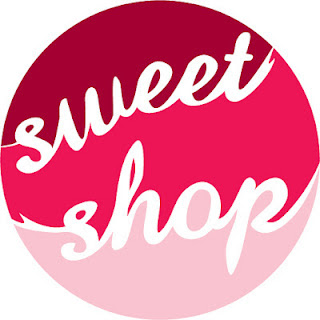 Go check it out and find out more about what goes on behind the scenes here, a bit more about our current and upcoming projects and enter the giveaway! There's also a coupon code good for 10% off any purchase!

As a mom, it's been frustrating for me that most of the super duper "ohmygoshthat'sSOcute" kids clothes that I've seen have been for girls. I mean, it rocks for my daughter, but not so much for my son. And he's got some fashion sense so, even at four, he's kind of noticed.

When he was a tiny little thing, I didn't trust my pattern-making skills quite as much as I do now. And store bought boys patterns...blah. The pattern books were pretty much filled with exactly the same vest and pajama pants patterns that had been there when I was growing up. Nothing terribly exciting, and nothing that my son was much interested in asking me to make for him.

At four, my son still wants "soft pants" - cotton or knit pants that are comfortable and allow him plenty of room to move around and run and climb without hindrance. His fashion sense wants them to be cute.

These puppies fit the bill: 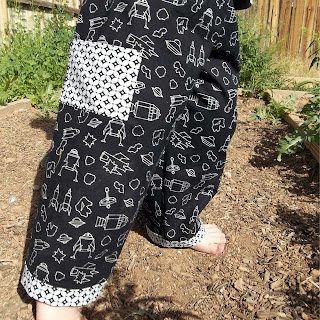 They're made from 100% cotton with contrast pocket and cuffs. The pockets are perfectly sized for die-cast metal cars, which turned out to be a huge bonus. they're also lined and reinforced, so they're strong enough to tote around a handful of rocks when that need seizes him. The cuffs are stitched, so they won't get floppy or gather dirt, and are also lined, so the pants still look finished if they need to be rolled to allow for growth. A wide, elastic waistband keeps the pants in place without rolling or biting into his skin. He says they're "really, really comfortable". (And, while it's not so much a concern for us, the roomy seat makes them great for wear with cloth diapers on littler ones.) 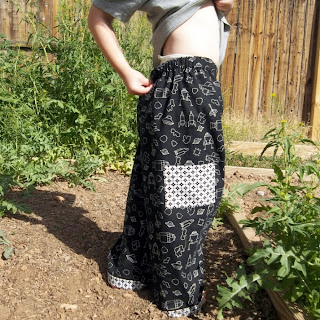 After talking him into slowing down long enough to take some pictures, he refused to take them off, so I'm calling these a success! 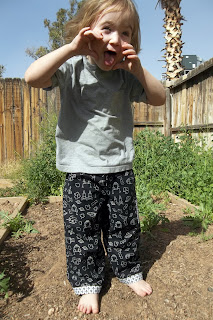 At the moment, there are two styles available in the Etsy shop.

According to my daughter, the green lounge pants are also awesome for girls. ;) 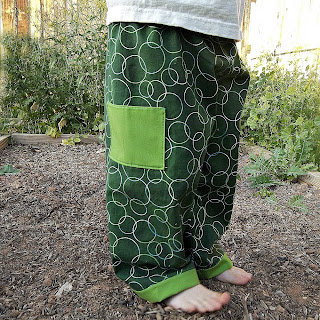 Mom and I have been working really hard the past few weeks to get everything lined out for the trunk show. It's been awesome watching things come together, and I'm getting really excited by some of the things that we've finished. I've also been stressing quite a bit over the things that I'd wanted to get done that just weren't going to get done in time.

Then, this morning, I got a mixed blessing phone call.

The trunk show has been postponed. It's still going to happen soon, but the date is TBD.

A bit disappointing, perhaps, but I'd be lying if I didn't admit that it's also a little bit of a relief. Now I have time to order additional soap supplies and make a few more quilts and round out the size runs on some of the new pieces that we've made and and and. Honestly, we could probably work for another six months and I still wouldn't feel like we'd done enough, but this *does* allow us to fill in some holes. ;)

I'm also excited to be home on the 3rd. Just after we set the date for the trunk show, my dad made arrangements to come visit...on the 3rd. D'oh. My son couldn't be happier. Although the Henny half of Henny & Ev is his best buddy, he wasn't at all pleased that we were going to miss a day of hanging out with Grandpa.

So, back to the sewing machine for me. ;)

(PS - The dedicated website is still on target and the blog feature is still in place, too, so there's still plenty going on!)
Newer Posts Older Posts Home
Subscribe to: Posts (Atom)