I'd wanted to post about the giveaway winner as soon as Kari made the announcement, but since Lisa requested a specially made item, I didn't want to give away the surprise until she'd received hers. If you've been following our facebook page at all, you've likely already seen the pictures, but for everyone else... 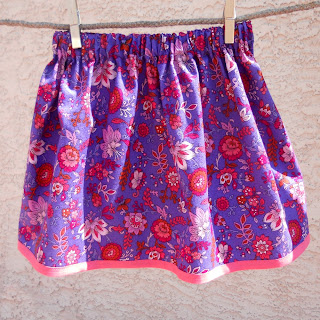 Lisa requested a skirt for her four year old, who likes pink and purple and who she described as very girly. The skirt got such a good response from our resident four year olds, that I decided to go ahead and list it in the Etsy shop, too.

The bad news? I've made an identical skirt for another four year old who fell in love with it...and can't get any more of the fabric. Gah! I'll keep my eyes open, but it looks like this one was a limited run. ;)